The Haggi Hassan (or Gazi Hassan Pasha) Mosque is situated in Lozia Square, in Kos Town, behind the plane tree of Hippocrates. The arabic inscription at the fountain of the plane tree informs that the fountain and the mosque were the work of Gazi Hassan Pasha. An engraved phrase in old Turksih script reads: “Gazi Hassan Pasha erected the fountain and water flowed from the spring of Hippocrates (ie Vourina spring) in 1200 (ie 1786 AD)”. Gazi Hasan Pasha was the Kapudan Pasha (Admiral) who administered the villayet (province) of the islands. He allocated a monetary sum for the construction of the mosque and of cells which were to help Muslim visitors to the island. The mosque was built with marbles and stones from ancient ruins, allegedly where there was a church dedicated to Saint George.

The mosque is a rectangular edifice, consisting of a spacious narthex (balcony or anteroom) and the mosque proper. The narthex is supported by 5 single-drum marble columns, which along with two others that support the little balcony of the stairwell, were taken from Agios Ioannis (St John) Ta Epta Vimata. To the north and outside of the narthex rises the minaret. Until the earthquake of 1933, the Mufti lived in the religious court (Mahkemeyi Seriye) next to the minaret. Double arches are formed under the narthex, with a passage that leads from the Lozia square westward. The cells under the mosque proper were used later as storehouses.

An entrance with a sculpted marble lintel, bearing Arabic epigraphy, connects the narthex with the mosque proper. The back area is set apart for women, while the men’s prayer lies in the front. At the far end of the mosque is the mihrap, a sculptured marble apse on the wall, where the imam stands, always facing toward Mecca. Next to the mihrap is the minber, a sculptured marble pulpit. The plain painting decorations still remain, but the epigraphic representation is missing.

Light enters into the narthex and the mosque proper from a double row of 61 windows. The upper row windows are representative samples of Islamic art and many of these are pairs. Inwardly, they have frames with plaster inscriptions from the Koran, and outwardly they have small round holes of coloured glass, also within plaster frames. Only 6 of these windows have ceramic frames.

To the NE of the mosque and beside the plane tree, there is a 14-sided round fountain of Mauritanian style, made of white marble, which is covered by a dome supported by 7 arches, resting on an equal number of stone and marble pillars of Corinthian-style capitals. The Muslims used to wash their feet at this fountain. From the staircase located on the side of the minaret, they walked up to the narthex, left their shoes, and entered the mosque for prayer. The main entrance, which faces the plane tree, was intended solely for the officials.

At a small distance from the mosque, on the mound which is now a park, there was a Turkish cemetery, as evidenced by two graves that still remain. The Muslims used to place the deceased, before burying them, on a stone table (musallatasi) which is still in its place on the southern side of the plane tree. 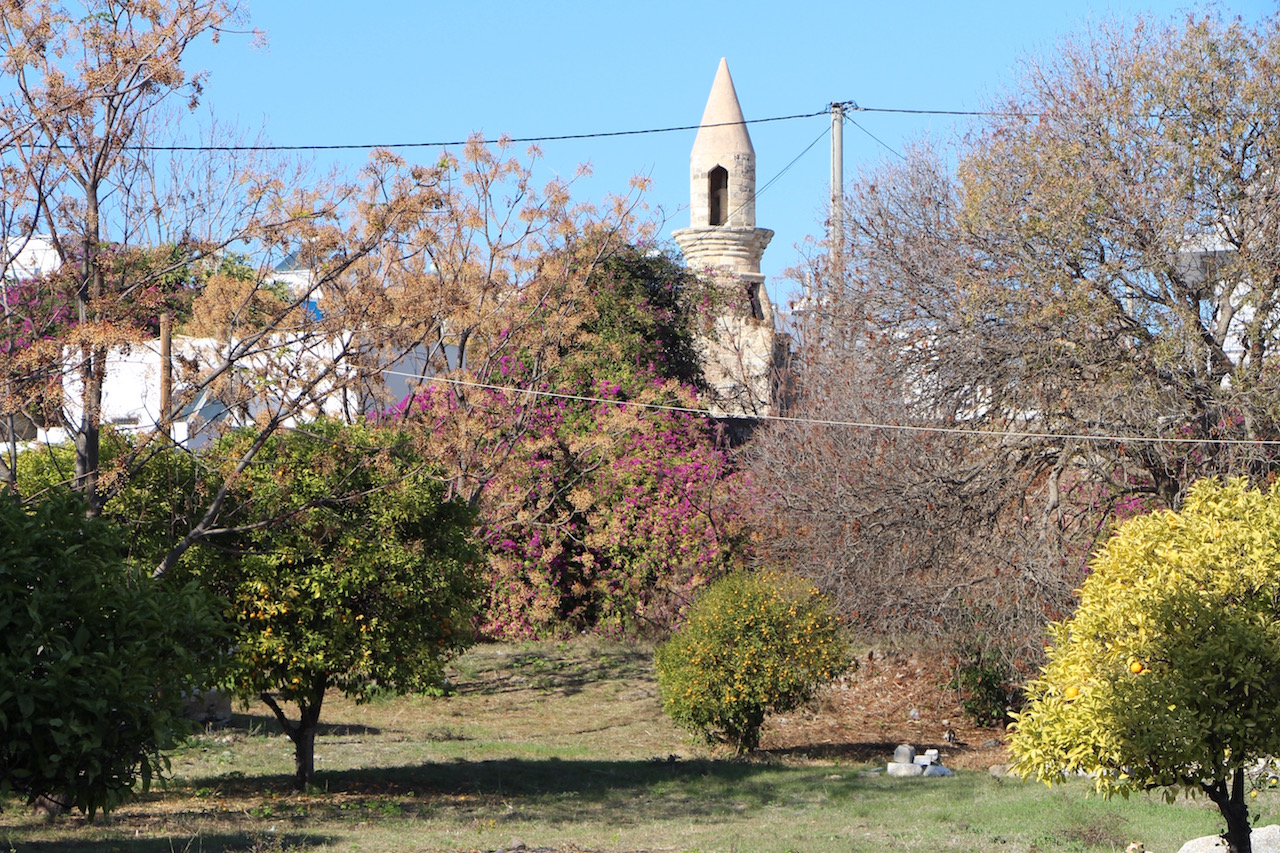 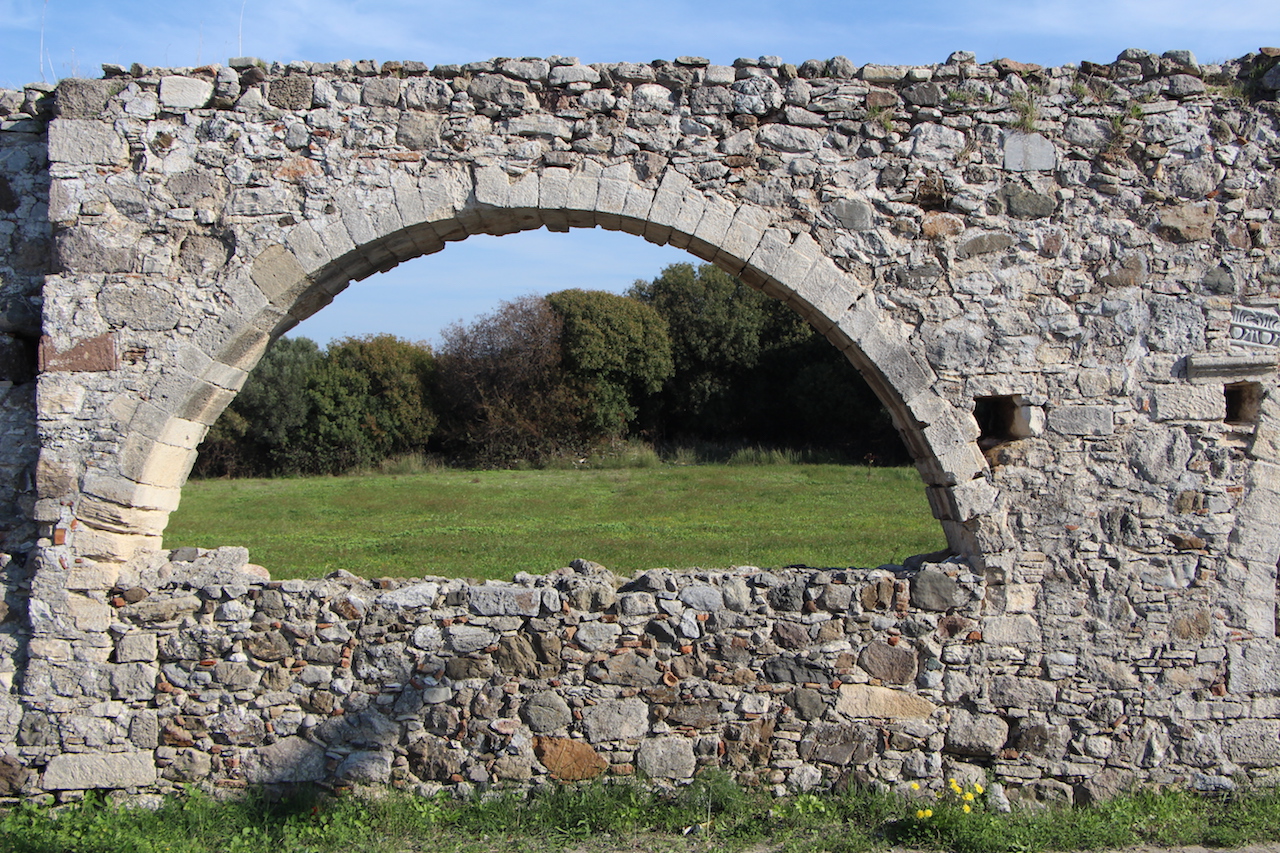 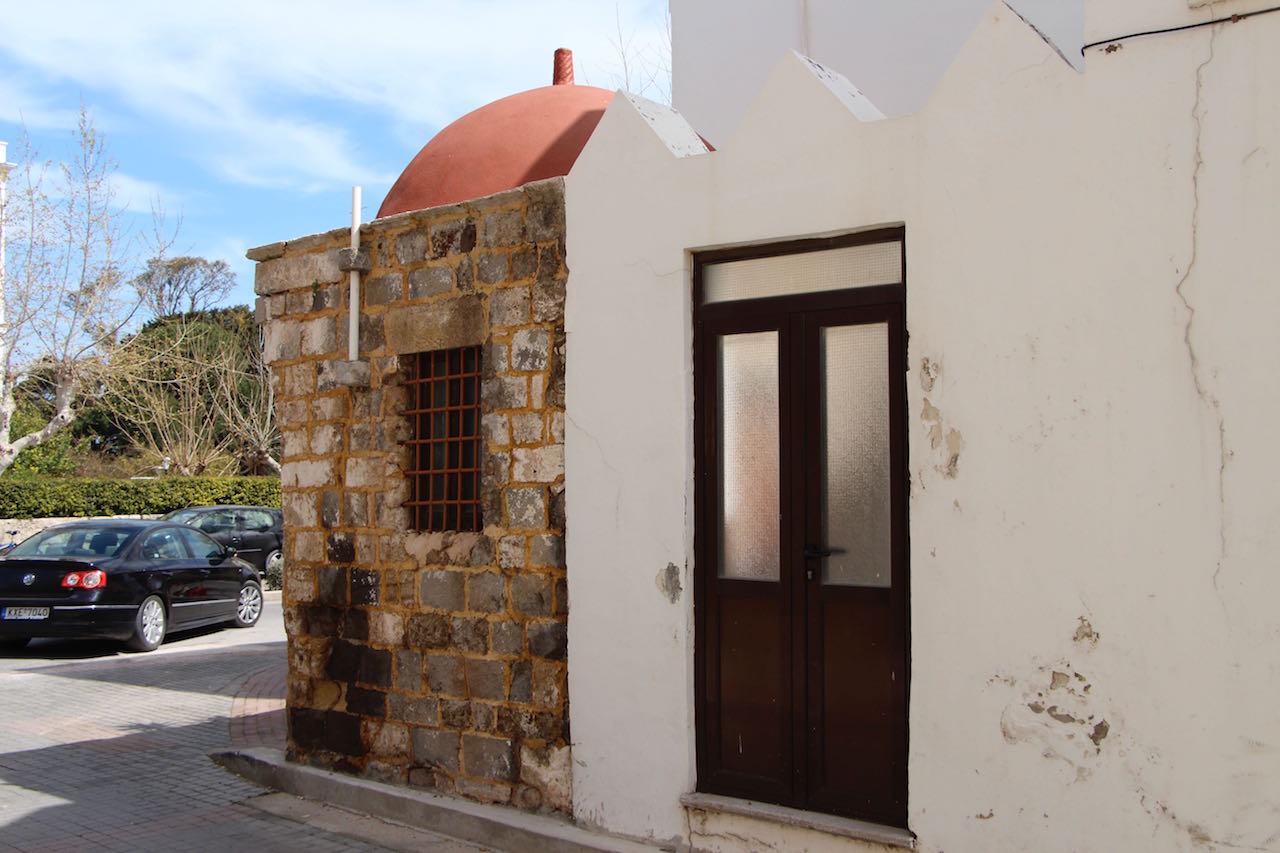